I first came across this ghostly story, which occurred in 1911 in Woking 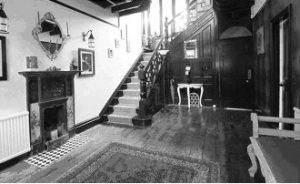 in Surrey, in Elliott O’Donnell’s book, Haunted Britain.O’Donnell was renowned for investigating and writing about ghosts and was asked to come to Woking to see this particular occurrence for himself.    Although he seemingly declined the offer, he still put it in the aforementioned book. As I live near Woking, I have and researched it over a number of years. Most of the material comes from the local and national papers, plus my own findings to get as near to a full a story as possible…

In 1911, the house in question was a modern house in Woking’s suburbs and one which you might not consider to be a traditional site for a haunting. Nevertheless, one day its inhabitants began to complain of strange and inexplicable sounds such as screeching, screams, yells and thuds, with no known cause. On one particular occasion, the sounds were heard no fewer than nineteen times in a given period. A bull terrier, who was kept in the house, suddenly stopped short in the hall as if it saw something, and then, with a howl, bolted into an another room. The Governess, who lived with the family, reported hearing taps at the windows and the sound of two bells had been rung. The maidservant also stated that thuds on the stairs had been heard, as if someone were being dragged down them. This occurrence was accompanied by the sound of deep groans. What was also quite intriguing was the fact that the sounds were only heard in daylight and nearly all of them seemed to be coming from mid-air in the hall.

Many theories were put forward as to what could be causing the noises such as owls in the roof, and wind in the water pipes. Someone even suggested it was ‘thought-waves’ from a previous occupier. Other local people believed that someone who had previously lived in the house was a natural medium who was that powerful they could even move heavy oak furniture by the aid of the spirits! Could it be they might have invited something in that was still there? Even The Right Honorable Gerald Balfour, a local political celebrity, had become interested in the case.

Whatever the case, undoubtedly word began to spread about the hauntings, particularly following an article which appeared on 19 May, 1911 in the local Woking paper: the Woking News and Mail, on Friday. The story was entitled ‘A Woking Ghost – weird happening in a local residence’. It was reported that during that past week, Woking has been excited over the stories of weird noises in a house in the ‘better part of town’.

Following the publication of the article, two more reporters from the local paper, called on the owner of the house, and in doing so, they heard for themselves the strange noises within.

They were being given a tour of the house when a shrill cry rang out. They rushed to the hall to find the maid in a state of terror. It was explained that this ‘cry’ would usually be followed by a loud groaning sound but this did not happen on this occasion. This  concluded their visit to the house. However some time later the strange cry was heard seven times and the servant bells rang in unaccountable manner.

The edition of the local paper, which hit the stands on the 26th May, 1911 with a further feature on the occurrences, under the headline ‘Shrieks and Wails Suddenly Cease’. Its pages carried an interview with the occupier, now named as a Mr. Holroyd who rented the property. By now, the story had reached the London press and gone national. However things at the house had gone quiet. The sounds that had been heard daily the week before (including the sounds being heard at 10.30pm for the first time) had been heard no more…

Since the case was made public, all sorts of people besieged the house to try to hear the sounds and give their theories – everything from trapped hedgehogs and cats to a victim of a murder, committed in the house, and buried under the floorboards. Mr Holroyd personally favoured the idea that the heating and cooling of the structure of the house was causing the noises.

The newspaper also received a letter from Mr. Holroyd, contradicting the reports that the cause of the haunting had been found. He wrote:

“Dear Sir—as I hear a report is being put about that ‘the ghost’ has been found. I am writing to contradict this unless it has been found by some outsider, in which case it is strange that the particular person has not informed us. I hear that some have tried to make out that the noises have been caused by the maid, and others that they made by my son. I state emphatically that I can prove this is not the case, and if I come across anyone making such a statement I shall place the matter in my solicitor’s hands, and make him or her answer for the statement in the proper place. It has been heard on several occasions, when neither has been in the house, nor even on the premises, also when others have been in their company.

Personally I do not believe in ghosts, and I feel quite certain these strange noises could have a very simple explanation as is generally the case in such circumstances.—Believe me, yours faithfully…

The next edition 2nd June 1911, only confirmed that no more sounds had been heard since last Sunday week. There was still no solution to the mystery…

The following week, on 9th June 1911, there was a dramatic development. The newspaper received a statement from Mr. Holroyd to the effect that the maid, Elizabeth Briggs was only employed temporarily in an emergency and she had been found unexpectedly in the house on her day off. Clearly both Mr Holroyd and the landlord of the property were suspicious of her intentions and questioned her about her actions. It is not known what information was gleaned from her, but suffice to say, she had now left his service and that he considered the matter at an end – the implication being that she was behind the strange occurrences. Elizabeth  then called in person to the offices of The Woking News and Mail and told the paper that she believed the sounds were caused by that of a ‘human agency’. She also confirmed she had left Mr. Holroyd’s employ.

I have traced the story to one of the national papers – The Dundee Courier, dated 24 May, 1911. Much of the story appears to be gleaned from a paper nearer Woking, maybe even a London paper. They had had sent their own reporter as well to visit Mr Holroyd.

Mr Holroyd stated to the reporter that he intended to stay at the address for only a few weeks more. He was, however, for reasons not given, still at the property after over a year. In the article, the house was again described in detail. The noises were heard first on the 4th May by the maid, hearing a loud shriek in hall, then heard by the twelve year old son a few minutes later. The maid is described as a rather timid girl, uses a night light in her bedroom. Mr Holroyd also said that having lived in the country most of his life he knew the sounds of owls, but these sounded like the shriek of a woman in pain or terror, then followed by a low moan. It is very difficult to place the source of the sounds. Mr. Holroyd  said that at one time when he was in the  bathroom and heard the sound, it seemed to be just behind him. The ghosts at the time of this article seemingly haunted between 6.30 am in the sunlight and 8.15pm in twilight.

The Hon. Gerald Balfour, given as the brother of the leader of opposition was currently Vice President of the Society for Psychical Research, and had been President of the Society 1906-1907. He had paid several visits to the house, and on two occasions had been fortunate to hear the noises. He was planning to bring in the  Psychical Research Society. Several eminent spiritualists and mediums also offered their services (one of these may have been his lover, Winifred Coombe-Tennant). An electrical engineer was also to visit the house, as well as the plumber and builder mention in the local paper.

After spending some time looking into this case, I have been able to find out more details of its background. The house was called ‘Glen Albyn’ at that time and was in West Hill Road, Woking and the occupier who was renting was indeed a Mr George Rice Holroyd, aged 43. The 1911 Census gives the other people living in the house as Mrs Lydia Constance Holroyd, 40; Charles Leo Cummings Holroyd, 11; Eileen Constance Cummings Holroyd, 7; Desmond Cummings Holroyd, 6; Gladys Ethel Higgins the  Governess 26; and Elizabeth Briggs the Maid 19. Mr Holroyd gave his profession as none, but was in fact the manager of his family’s local brewery. He died in 1961. The maid, originally from Goole, Yorkshire returned to Yorkshire, married Arthur Vaux and died in 1975.

The mystery of this story is why Briggs, who was a timid girl, got the blame. What was she doing there on her day off? If it was her, how did she make the sounds? And why did Mr. Holroyd go from defending her to totally blaming her? He states in the letter to the paper that she was not present when some of the sounds were heard.  It could be significant that the landlord  was present after she was found in the house on her day off. Could it have something to do with a threat to sue for ‘Slander of Title’?  You could be sued for loss of rental income by ‘slandering the property’. For instance, if you said it had bad drains, you would have to prove this in court. In this case you would have to prove that the house was haunted, which would be virtually impossible. This is what happened with the Hill Side House case at Egham. In 1904 when the Daily Express carried an article about the renter of this house, the poet Stephen Phillips, he said he was leaving because it was haunted. Both parties were successfully sued for “Slander of Title” by the landlord for damages of £200.00. He said he could not rent the property because of the publicity. The Daily Mail and weekly occult paper Light ran the story again in 1906, and both got sued again! The Light was a British weekly periodical created by The Spiritualist Alliance

The Holroyd family moved out of this house to another house which they purchased in Woking in this same year. Mr Holroyd lived there until he died. As for Elizabeth Briggs – was she sacked or sent off  with references, to shut the whole thing down, to avoid being sued? Who knows? She certainly did not seem to suffer the dire fate of a servant dismissed from their post in this period. In fact she had a family to help her and she seemingly lived a long and happy life.

Glen Albyn still exists on the outskirts of Woking, although under another name. Pictures from a recent house sale show the hall of the property, very little changed from 1911, including the hall. Perhaps someone in the families knows the answer to this mystery. Was it owls in the daytime, cats hedgehogs, or Elizabeth Brigg’s ‘human agency’?